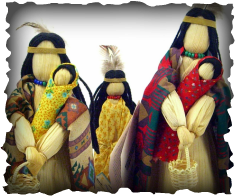 The history behind our dolls is that we were reading the novel, Amos Fortune, Free Man. It is a biography about a man named Amos Fortune who was born the son of an African king. In 1725, when he was 15 years old, he was captured by slave traders, brought to America and sold at auction. For 45 years, Amos worked as a slave and dreamed of freedom. At 60, he began to see those dreams come true. It is a Newbery Honor Book. In the book, it mentions a corn husk dolls that a little girl has.  We thought it would be fun to make them.

Native American Indians invented cornhusk dolls centuries ago. They are usually made without facial features; an Iroquois myth explains why. According to legend, one corn doll became increasingly taken with her own beauty, which displeased the Great Spirit. She was admonished to refrain from such vanity so she tried to be more humble. But one day she was passing a stream and could not help but admire her reflection in the water. The Great Spirit sent an owl to snatch her reflection from the water and from that day forward, she could no longer see her face.

How to make a corn husk doll